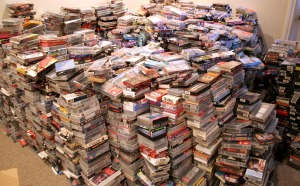 A wide collection of trailers, shows, recordings, and other captures on VHS tape.

411 Video Magazine (commonly abbreviated as 411VM or 411) was a skateboarding video series. 411 was created in 1993 by Josh Friedberg and Steve Douglas. 411 released four issues per year, until its last issue, issue 67 was released in 2005. Prior to 411, professional skateboarders only showcased their video footage in major video releases, which were sometimes spread years apart. 411 gave skateboarding fans access to videos of professional skateboarders more frequently than ever before. 411 was...

Provided by many contributors, these a compilations of products, projects and politics played at various points during television shows, giving insight into culture and priorities from the times they were initially aired.

One large segment of the home video market were VHS tapes containing education, instruction and promotion of services. Ranging from deeply informative to lightly brushing the subject, these tapes contain a microcosm of the ideals of education via television.

Collections of television, often recorded to VHS tape, aimed at a young audience.

The VHS Vault
Lipstick On Your Collar 3 Volumes
movies

Lipstick On Your Collar 3 Volumes

Louis has some shows to watch, from a distance.

This collection is filled with all of the blank tapes that have come across my hands over the years. it includes shows, clips of movies, full movies, commercials, news shows, music shows, and different sports that were all recorded off the television, either by me or a close family member or friend. The videos range from airings from the early 90s to the mid 2000s. I loved putting these tapes to digital because it was like archiving time capsules of the past. If i ever come across more blank...
Topics: Nostalgia, VHS, WOC, Flashback

Pesnya goda (Russian: Песня года), meaning "Song of the Year" was a Soviet televised music festival that subsequently became a Russian festival. First held in 1971, it became the main event of the year for Soviet singers and musical groups, akin to the American Grammy. During the year, popular songs were selected each month for inclusion in the festival. Each December, a concert was filmed featuring live performances of the finalists chosen from the selected songs, although...

A collection of over 6,000 VHS tapes, the majority found throughout the state of Minnesota, consisting of recorded content from the decades of television, bootlegs, and home recorded movies. From time to time, retails will also be added to here on certain exceptions. This collection is meant for archival purposes and educational value only and is not intended to infringe on any copyright. I do not intend to profit off of any of the digitized recordings and neither should you, I'm looking at you...
Topic: VHS Rip

A collection of off air TV recordings, focusing on Australian and Japanese TV, spanning from the 70s to the 90s from the collection of Rhys Marshall (Known as FLEMISHDOG online). Also included is "VHS Shit", a collection of Esoteric VHS content such as instructional videos, exercise videos, religious videos, ect. Content comes from off air recordings from VHS, Betamax, and U-matic.

A collection of VHS Vault-bound items thought to be destined for the VHS vault in general.

A collection of relatively modern shows recorded on VHS tape, or about VHS tapes and history.

Collections of variant VHS recordings, often with multiple different types of materials in one recording, spliced together as people would often do. Where possible, specific subjects are in other subcollections, but this material ranges from professional productions to homemade tapes. Enjoy digging!

A collection of vhs recorded full-length films and programs, from a wide variety of sources, often broken up by commercials and the indignities of television.

Sports and events recorded on VHS.

Logos and movie message openings from VHS and other home video tapes.

Advertisements and trailers for other VHS tapes and television shows, often included on the VHS Tapes themselves.

A random assortment of user-uploaded captures of news and journalism coverage of events and stories by a combination of news programs, television specials, and self-recording.

A collection of homemade VHS tapes from around the United States.
Topic: VHS

DESCRIPTION
A wide collection of trailers, shows, recordings, and other captures on VHS tape.
ACTIVITY